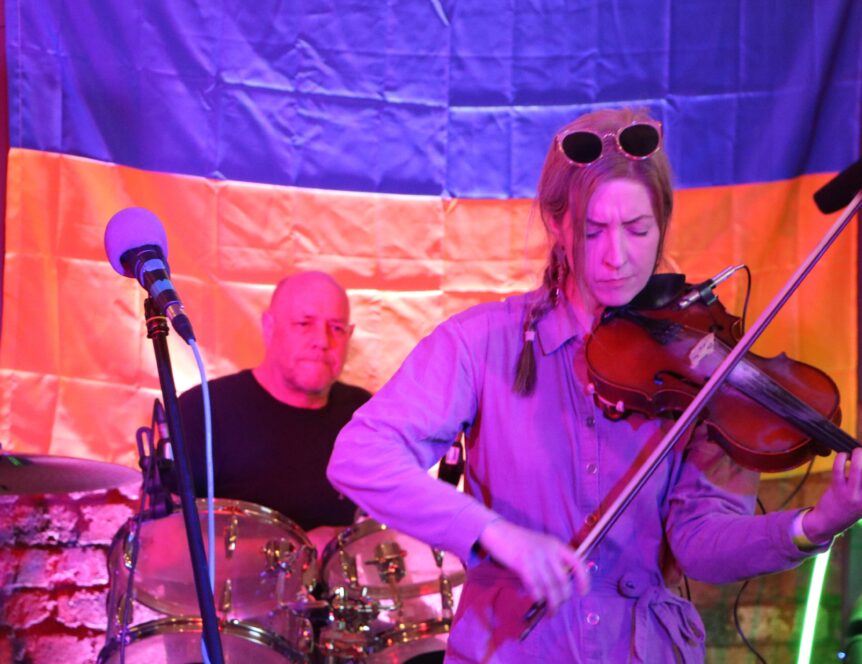 Organisers of a fund-raising event in Leek to help the humanitarian efforts in Ukraine have hailed it a massive success following a day of live music.

FoxAid took place throughout the day on Sunday 20th March at the Foxlowe Arts Centre in Leek with a host of local bands volunteering their time to play from 1pm until 10.30pm.

With a double stage setup and sound engineers from Leek managing the desks and lights for free, FoxAid featured almost 12 hours of continuous, high quality local music, fuelled by a special FoxAid IPA beer donated by Joe Alsop of Hartington based Whim Ales, all in support of fund raising for the DEC – British Red Cross Ukraine Humanitarian Appeal.

Organiser, performer and Foxlowe trustee Andy Norton said: “We were blown away by the response from the local music scene when we put out the call for bands to play at the event. It’s been a fantastic day of music here at the Foxlowe and I’d like to add my personal thanks to the musicians, sound engineers, staff and the many volunteers who have helped to make it such as great success.”

Volunteer organiser Dave Swarbrook said: “We have been delighted by the response from the Leek community to this event almost selling out of tickets before we’d even opened the doors on Sunday afternoon.  I’d also like to thank Totally Locally Leek who organised a raffle and contributed all the prizes, they sold tickets during the event and have managed to raise over £650 which is an amazing additional contribution to the appeal.”

Musician and organiser John Crimes said: “With the combination of event ticket sales, raffle money and donations made during the day we have raised a total of over £2500. Insurer Aviva and payment gateway sumup® will match fund this, so a total of £5,000 is now on its way to those in crisis in Ukraine and surrounding countries supporting them. And yet again, it’s a demonstration of what makes Leek such a great place to live with all the community coming together to help when called to action.”