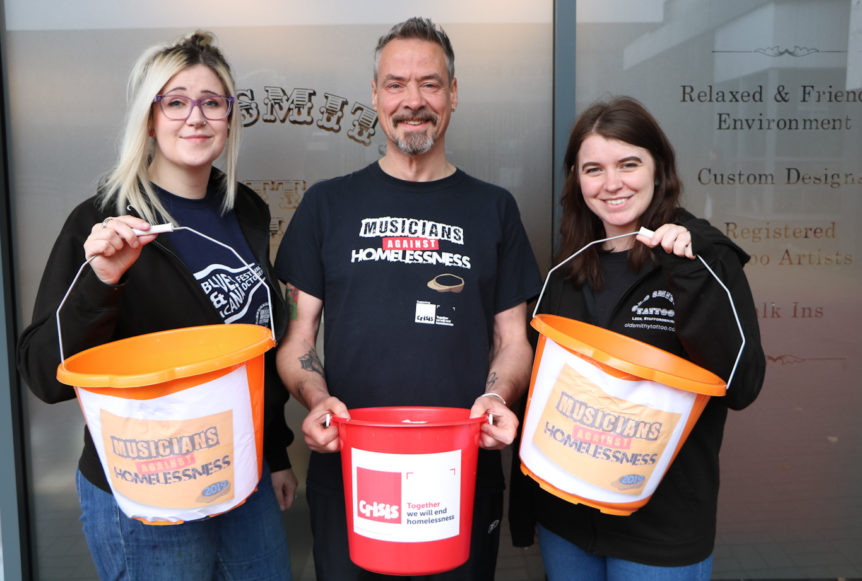 Homeless charity, Crisis and Leek Food Bank are set to benefit from money raised during the Leek Blues & Americana Festival and performances at the Foxlowe Arts Centre.

Money was raised through the Musicians Against Homelessness (MAH), initiative which was set up in 2016 by homeless charity, Crisis volunteer Emma Rule and Creation records boss, Alan McGee.

The charity has a twofold aim: to raise money for the homeless and to help young musicians to get gigs and exposure for their music.

Collection boxes were placed at venues including the Cock Inn, Roebuck and Foxlowe during the festival. Festival sponsor of the Sparrow Park outdoor stage, Old Smithy Tattoo Parlour, coordinated the collection which was added to money raised at a Foxlowe gig featuring several local bands under ‘The Situation’ banner.

Matt Wall, owner of The Old Smithy Tattoo Parlour said: “I’m amazed at the generosity of gig-goers during the festival. People attending have a great appreciation of how important the work of homeless charities is and genuinely wanted to help by donating their spare change.”

Stephen Hammersley, North Staffordshire coordinator for Musicians Against Homelessness added: “I’m really grateful to everyone in Leek for organising the collection of such a respectable sum of money. Every penny goes in to helping homeless people and will make a real difference to people’s lives.”