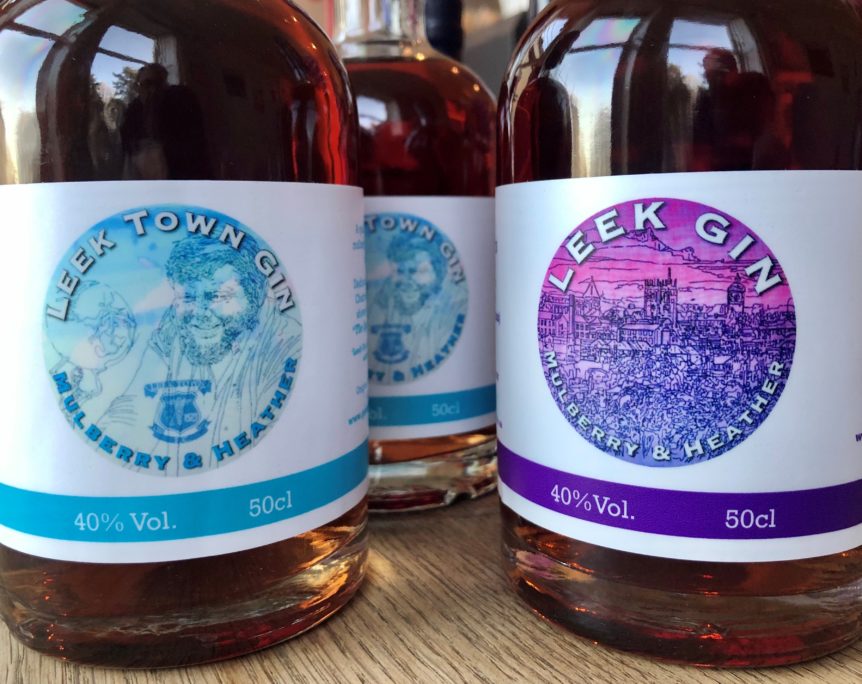 The first batch of a new brand of gin celebrating Leek and Leek Town Football Club has sold out within a week of its release.

The gin was the idea of Leek resident Dave Swarbrook, known to many for his work with the Leek Blues & Americana Festival.

Dave said: “It started with a conversation with Leek Town Chairman Jon Eeles. We had put together beer packs for the past two Christmases and thought it would be a good idea to capitalise on the popularity of gin.

“I’d heard that Staffordshire Brewery had set up a gin distillery, The Papermill Distillery. I spoke to Tom and Joe at the distillery and we came up with a gin blended with black mulberry, mulberry leaves and heather botanicals. Mulberry being related to the silk industry and heather indigenous to the Staffordshire Moorlands, as depicted in the Leek Town coat of arms.

“In the meantime, I met with artist Gavin Bowyer who I had worked with during this year’s Blues & Americana Festival. Gavin came up with two label designs, one for Leek gin and one for Leek Town gin.”

Several pubs and bars in Leek are already selling the gin behind the bar, those being; Den Engel, Beyond the Pale, The Blue Mugge, Mill Street Club and Leek Town Social Club. Brewce’s Craft Ale bar in Stanley Street, Wine & Whisky on Russell Street and Brew Box on the Sunday Supplement Christmas market also have bottles for sale.

Paul Harrison, landlord of the Blue Mugge added: “I’m personally delighted to be selling the gin as the Leek Town label features my late father, Geoff when he was Chairman of Leek Town. On the picture he is holding the Leek Cup, from the early 1970s when Leek Town won seven of eight local trophies.

“By coincidence the gin distillery is on Harrison Way in Cheddleton, also named after Dad, so I feel a great pride to be able to sell it in in the pub he used to run.”

Looking forwards a second batch of gin is being bottled in time for Christmas and Dave Swarbrook added: “I’ve been amazed by how quickly the gin has sold.  However, Leek people are very proud of their heritage and we seem to have tapped into this with the branding.

“I’m hoping we can keep this going as long as the demand is there.