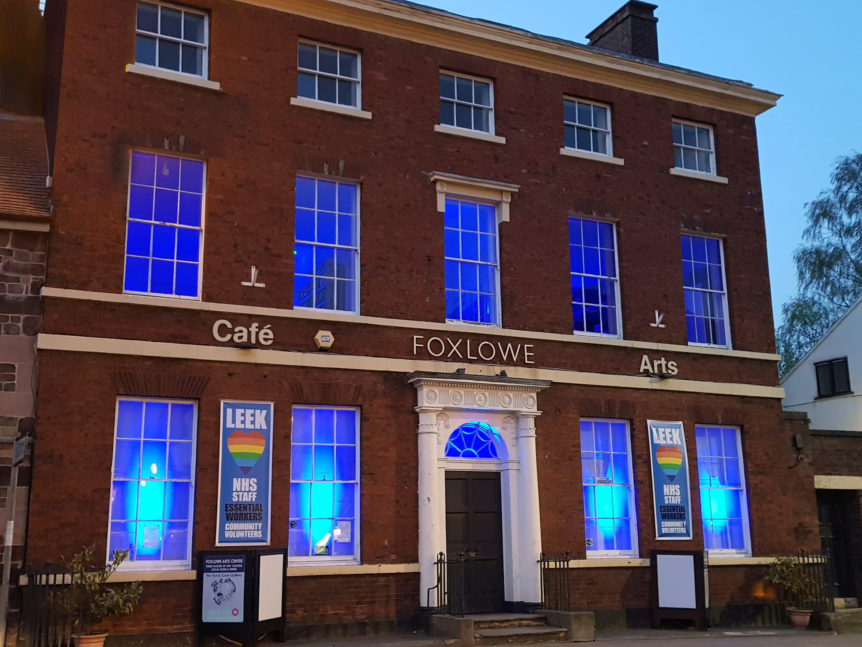 The Foxlowe Arts Centre in Leek may be closed due to the Coronavirus Covid-19 pandemic, but it was able to show its support for the NHS, essential workers and community volunteers by being lit blue from the inside for the weekly appreciation taking place each Thursday at 8pm.

The idea came from Leek Blues & Americana Festival organiser, Dave Swarbrook who was an integral part of the team involved in lighting the Nicholson Memorial Monument clocks up with red poppies, to commemorate the centenary of the end of the First World War in 2018.

The idea was given the go ahead by Foxlowe Arts Centre chair, Chris Thompson and the trustees in early April and the whole project was put together, mostly on-line, in just over a week.

Foxlowe Trustee Marc Briand designed vinyl banners to go on the outside of the building which were produced by Dan Allen at Leek-based Supersport, with eyelets being added by Dan Williams owner of The Staffordshire Cobbler, also in Leek.

Dave Swarbrook said: “It’s been a real team effort with all the work and planning performed in people’s own homes. We had one site visit which took less than an hour, to check the Foxlowe was OK, observing social distancing at all time.

“It cost around £100 donated by myself and friends and shows what can be done in a short space of time with a willing bunch of volunteers.”

The Foxlowe Arts Centre will be lit up blue each Thursday from 8pm to 11.30pm whilst the current lockdown is in place.