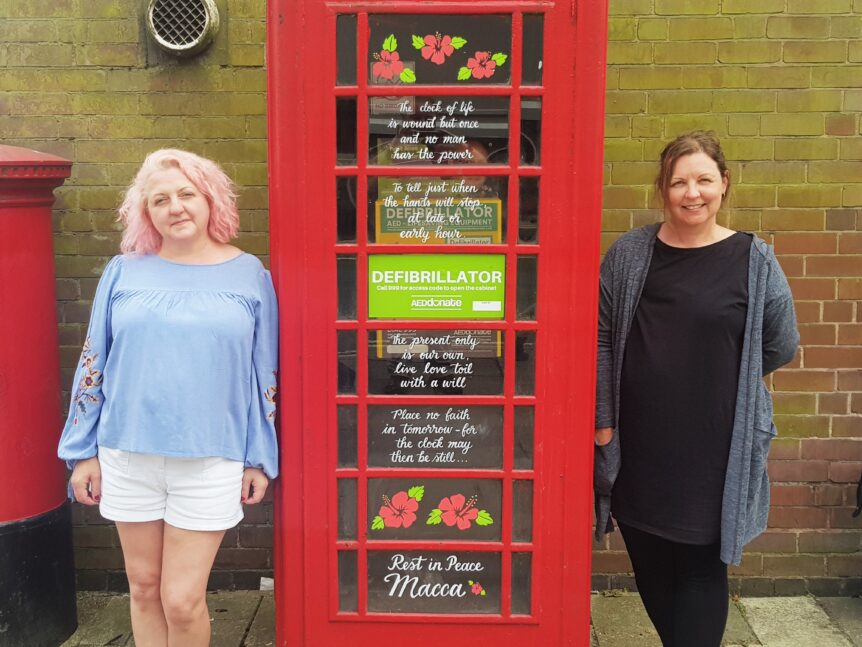 A phone box housing a defibrillator, close to the site of where a popular Leek resident was found collapsed, has been given a memorial tribute by a local calligraphy artist.

David McNeaney, known as Macca to his many friends, passed away suddenly on New Year’s Eve 2020. Generous donations in his memory, from family and friends, have now paid for four defibrillators around the town including one in the former phone box at the top of Market Square.

The original idea of a creative tribute came from Vicki Heath from the Foxlowe Arts Centre, who volunteered to regularly check the defibrillator.  Artist Amanda Holdcroft, of Just Add Chalk, decorated the phone box with verses from the poem, ‘Clock of Life’, and hibiscus flowers.  The poem was read out at David’s funeral and the flowers are a nod to the trademark Hawaiian shirts he always wore when he was out around the town.

David’s sister, Phillipa Thorogood, said: “The family are all incredibly moved by this beautiful memorial tribute to David and we are really appreciative of Amanda’s fantastic artwork. We hope it will also help to highlight the additional defibrillators now around town which are all about saving lives, the more people that know where they are the better.”

Amanda, whose artwork already features on several windows of town centre shops and the Foxlowe Arts Centre said: “It was a real privilege to be asked to decorate the phone box in honour of David. I know how popular and well-liked he was. I’m delighted the family are so pleased with how it’s turned out.”

The ‘David McNeaney Defibrillators’ are located at the Market Place, Sparrow Park, Broad Street and Fernwood Drive in Leek.  Anyone wishing to donate to installing more defibrillators in and around Leek in memory of David, can do so at: https://www.aeddonate.org.uk/projects/david-mcneaney/