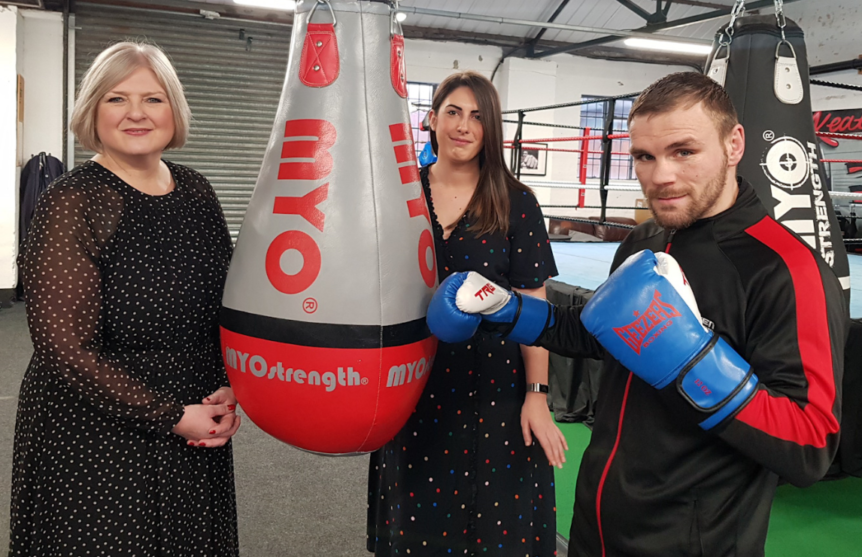 A Leek boxing club is forging relationships with business as it looks to build on its growing reputation.

Keatesy’s Boxing Academy in Cruso Street Leek opened in June 2019 and is already making a real difference to the lives of dozens of young people.

The club is owned by professional boxer, Andy Keates and his partner Carly Ball, who are both passionate about their work in getting young people off the streets and using boxing to give youngsters self-esteem, to channel aggression and to lower the crime rate.

Carly said: “We’ve had fantastic local support from day one. We are working with the police, local children’s homes and schools to give young people something positive to concentrate on.

We have now started to forge relationships with other local businesses and have been taken aback by how supportive they have been.

“For example, we were struggling to keep up with the demand for gloves, so three local businesses; Moorlands Contract Group, Ornua and Staffordshire Moorlands Chamber of Commerce, have all made donations totalling £500 to pay for more gloves.”

Local businesswoman, Suzanne Davy, director of Moorland Contract Group, who has been attending ‘boot-camp’ classes at the club since August said: “ I’ve been really impressed by how well the club is run, and what a positive impact it is having on the lives of so many people.

“I got chatting to Andy and Carly. It soon became apparent that there was a way in which local business could help with funding vital equipment whilst their own business is getting established.”

Andy added: “We can’t thank the businesses enough. Hopefully what we are doing here has a benefit to the whole community. Boxing has changed my life and I want to pass this positive message on to the young people who walk through our doors.”

The next urgent need is for new flooring for the club and plans are already afoot to look at ways of raising the money for the flooring mats through sponsorship.