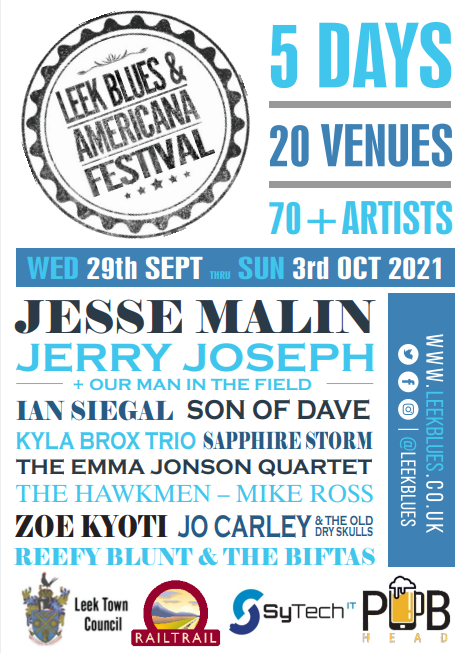 Following a year’s absence due to the pandemic, the Leek Blues & Americana Festival is back with a bang running from 29th September to 3rd October with a packed programme of over 70 events in 20 venues around Leek.

It all kicks off on the Tuesday night with a screening, at the Foxlowe Arts Centre, of ‘In the Heights’, a 2021 American musical drama directed by Jon M Chu, telling the story of a corner in the predominantly Dominican Washington Heights neighbourhood of Upper Manhattan in New York City, where every member of the community pursues their dreams of a better life.

Headline act, Jerry Joseph will be at the Foxlowe Arts Centre on Wednesday 29th September. Joseph is a prolific, road tested, US troubadour whose blend of rugged Americana, folk and country has played out over dozens of albums.

On the Thursday night at the Silk Mill, Approach Dementia present ‘Manchester. Music. Memories’ with Kyla Brox Trio. Kyla has numerous UK and European blues awards and she is one of only three British singers included in the ‘50 Women of the Blues’ Spotify playlist.

Friday night’s headliner at the Foxlowe is former Crash Test Dummies member, Son of Dave. Playing harmonica, layering up beatbox grooves, stomping and playing percussion, he is a truly maverick bluesman. Hailing from Winnipeg Canada. He’s toured all over Europe and North America and beyond. His one-man show is fun and unforgettable.

Malin first rose to fame with the influential punk band D Generation and has since embarked on an acclaimed solo career. His Ryan Adams-produced debut, ‘The Fine Art of Self Destruction’ earned him comparisons to Neil Young and Tom Waits for its ragged, poetic beauty.

Siegal is a singer, songwriter, guitarist, bandleader and recording artist whose music encompasses Blues and Americana. Described as a legend and a national treasure, a typical Siegal solo show features blues, taking in the American folklore of songwriters such Guy Clarke and Townes Van Zandt,

The free live music programme starts on the Thursday with bands playing a plethora of gigs up until the festival ‘Last Call’ at the Roebuck on Sunday night from 7.30pm until close.

New for 2021 is Foxville at Foxlowe Arts centre which comprises indoor and outdoor family-friendly spaces with live acts and music workshops. It acts as a gateway hub for festival goers where you can visit selected local traders, buy festival merchandise, and catch up with the latest festival news.

Festival organiser JR Mountford said: “I am delighted that we are back following such a tough time since our last festival in 2019.

“I think we all need some cheer and there is no better tonic than live music and the fantastic atmosphere generated by Leek Blues & Americana Festival.

“It takes an incredible amount of work to put the festival on so I would like to give a big shout out of thanks to all the organising team, the venues, the artists and sponsors

“The festival helps to promote Leek and brings great economic benefit to the town which spins off to retailers, accommodation providers, taxi firms etc., as well as the pubs and restaurants who host the live music.”

Tickets for the headline acts are available online or at Foxlowe Arts Centre. Details of the festival can be found at www.leekblues.co.uk or on Facebook. There are also plenty of programme leaflets around town at all the venues.