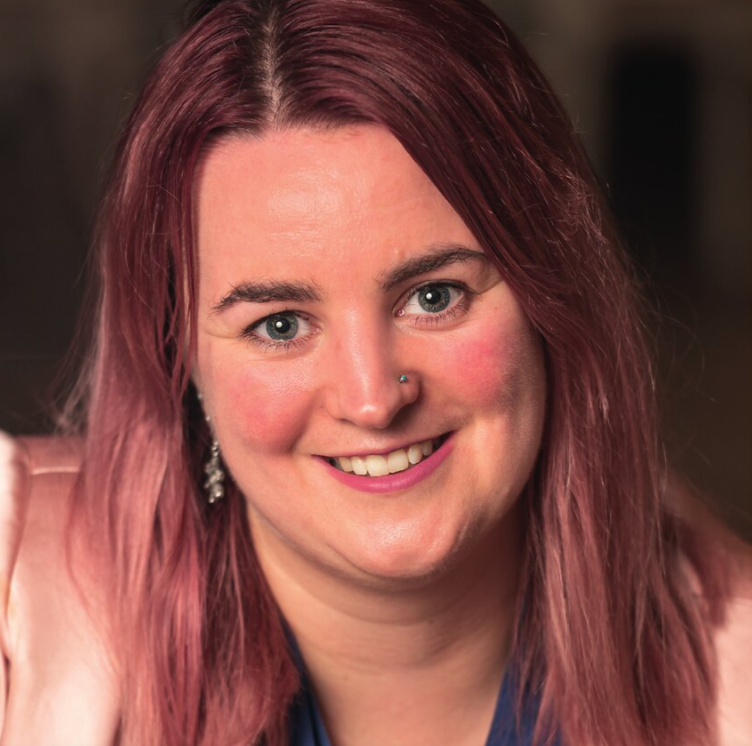 “I grew up thinking it was normal to spend time in my parents’ office,” says newly elected president of Staffordshire Chambers of Commerce, Kate Beardmore. Kate was four years old when Mum and Dad, Carol and Kevin Shanahan set up fledgling IT company Synectics Solutions.

This early exposure to business obviously made an impression on the young Kate who became president of Staffordshire Chambers of Commerce in November 2021, only the second female president, following Margaret Michell twenty years previously, but at 33 certainly the youngest ever president.

Kate is the eldest of the Shanahan’s four children, a family well known not only as successful entrepreneurs, but also as the owners of Port Vale FC and founders of the Hubb Foundation, a charity dedicated to supporting families and communities.

Kate said: “I wanted to get into the world of work and having spent so much time at my parents’ offices it seemed the obvious place to start.  Mum and Dad offered me a temporary office job and 15 years later I am still here!

“My next opportunity was a maternity cover job in finance. I had always been better with figures than written words (Kate discovered that she was dyslexic in her penultimate year at school). It was great to utilise my A level Maths. I had my first management role aged 20 when Mum literally told me to “drop what I was doing” and take on the running of the back-office, including administration, recruitment, and finance.

“I now realise I have always tended to make myself redundant every four to five years and my next challenge was to be involved in sales and client management. I really loved looking after people and this included a portfolio of 100 clients in eight countries.

“I became a director of Synectics Solutions in November 2014, a month before my son was born. After maternity leave, I was back with a new challenge of finding an additional building to accommodate the ever-growing business.

“I told Mum I had found the ideal place in the old Co-op HQ in Burslem. Hilariously she had a rant about relocating to Burslem. If only she had known she would end up buying the football club next door as well a few years later.

“So, as is the fluid nature of my career Mum suggested I take on the role of people success (HR), director.”

True to form Kate expanded her role again and is currently heading up hospitality at Port Vale which includes all football and non-football events and hospitality including kiosks.

Kate’s first experience of the Chamber came through Future Finest.

Kate said: “As a young professional I needed to expand my network. I met some awesome people and attended events which ticked the boxes in helping me to make great connections, forge friendships and develop professionally.

“I moved on to Finest and Sara Williams asked if I would like to join the Chambers Board. Six months later Sara and Chamber President, Matt Hubbard asked if I would become deputy president with succession to president at the end of Matt’s term of office.

“I immediately said yes thinking I would be daft to refuse. It then hit me what a privilege and an honour it was to be asked and I used the intervening time to observe and to think about what I would like to achieve in office.

“The Chamber has been an incredible support to businesses during the pandemic and it has been fantastic how the team dedicated themselves to helping businesses negotiate the daily uncertainty and financial turmoil. I think the pandemic really bought out the best in the whole business community who have in turn been really supportive of each other and the wider community.

“I was immensely proud to be present when Staffordshire Chambers picked up the British Chamber of the Year Award in December, it was totally deserved and a great reward for everyone who went the extra mile to ensure Staffordshire businesses survived the pandemic.

“As we come out of survival mode I want to move towards a state of thriving. I want to ensure all businesses get the full benefit from membership in terms of representation and services.

“Being involved with the Hubb Foundation keeps me grounded and I want to continue the Chambers support of all our local charities. I would like to initiate a charity ball during my presidency as a fundraiser and a platform to highlight charities and thank them for their vital contribution to local life.

“With my governance hat on I would like to update the Chambers’ Articles of Association’, to reflect where we are now, as some of which date back to the middle of the last century.

“Finally, and most importunately, I want to be hands-on and approachable. I intend to meet and get the views of as many members as possible, whether that’s at Chamber events, boards and forums or visiting businesses.”

Book – Anything by Giovanna Fletcher

Music – Any upbeat pop such as Emeli Sandé

Leisure activities – Time with my children, Jacob (7) and Isabelle (3), dancing and sleeping!

Who inspires you and why?

My mum, Carol for her drive, determination, and vision and for doing the right thing.

Richard Branson, he is dyslexic and left-handed like me!

Tony Hsieh – Former CEO of Zappos, which had the most amazing culture even when it sold to Amazon for $1.2 billion in 2020.